Here be zombies... (and Celts)

Just so you know, there aren't any actual zombies in this post. It's just that I went to visit my mother, who now lives in deepest darkest East Anglia (for no apparent reason) and I swear I saw a group of zombies shuffling down the road once. Ask my husband. He'll tell you all about it. Actual. Zombies.

But it has to be said, it's not my favourite place in the world to visit, and nor is it Rosie's. Mainly because my mother obviously chose to live in the arse-end of nowhere, down many a twisty-turny country lane, and she has a small car and a terrible sense of direction. And even worse driving skills.

That said, in amongst the brief periods of fearing for our lives ("Oooo look, there's the cathedral!" she says, as she swerves two lanes across the motorway in its general direction), I got to see my nephews and we got to go crabbing. I think it must be a good 25 years since I last did that, and I always loved it as a kid. And I caught the biggest: 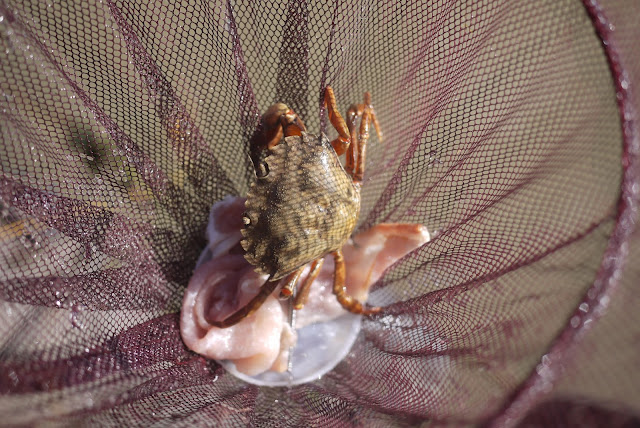 In a new-fangled net thingy. Not the way we used to do it when I was a kid, but much easier, and Rosie caught two shrimps in hers.

My sister and her family could only stay the weekend because the kids had to go back to school on the Monday (mine are on their half term at the moment, though), so after they'd gone we had a quiet day at a park so the kids could enjoy some sunshine for once, and then I convinced mum to have a day out in London. It was a bit of a trek but seeing as we were – relatively – so close, how could I not take a visit to the Celts exhibition at the British Museum? It's coming up to Edinburgh in the new year but I'm impatient.

And I was a little disappointed, ultimately, I have to admit.

I was hoping to take some photos but in spite of the fact that you can take photos everywhere else in the museum, it's not allowed in the exhibition itself. Mr Seren suggested it's because of the complexities of licensing agreements between the various museums who've loaned pieces, and while he has a point, legally speaking, I still maintain it's utter fucking bullshit. For £16.50 a visit they could take the time to sort their shit out, thankyouverymuch. I snuck as many photos as I dared but the staff were fairly well on top of things. If only I knew how to turn the sound off on the camera....

We got to the museum around midday and it was fairly busy, mostly full of people of a certain age, shall we say. London being as it is, everyone's rude and pushy and it was no different in the museum – people crowded round the exhibits and refused to budge until they were good and ready, and it probably wasn't helped by the fact that it was really dark and hard to see the information blurbs (especially if you're of a certain age and/or your eyesight's not top-notch). But gods forbid you take your own time. In amongst the atmospheric, calming music you could mostly hear tuts and sighs from the disgruntled people waiting to get their turn at the front, while the people already at the front got shirty about it and deliberately took even longer. It didn't help that the entrance to the exhibit was clogged up by people watching an introductory slideshow that lasts three-minutes, so you instantly walk into what's essentially a meat market.

But anyway, there really are some amazing pieces on display. The Battersea shield's there, and so is the original and then replica of a carnyx, or battle horn (I guess you'd call it), that was found in Deskford, near Moray in Scotland. Here's a photo of the replica from the Creative Commons:

It's a very cheerful carnyx considering it's probable purpose is to induce and encourage mass slaughter, but hey. Times change. There were some headsets available so you could listen to what the horns would sound like, which was one of the few things that impressed the kids. They've tried, with a "follow the boar signs for family fun" but in general there's not much for kids there.

And yes, the infamous divination spoons are there, with cautious commentary about how they "might" have been used for "fortune telling" or ritual purposes.

The true star of the exhibition is the Gundestrup cauldron, though, it really is. There's a small replica on disply in the National Museum at Dublin but the real thing is both surprisingly huge and amazingly detailed. I never fully appreciated its magnificence until I saw the real thing, I guess.

I snuck a photo of one side: 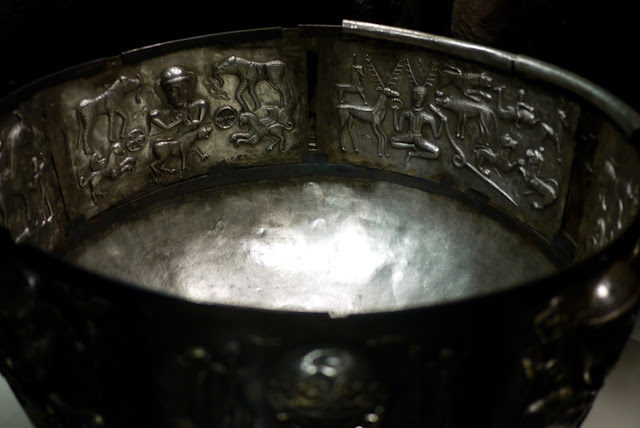 Which really doesn't do it justice. The cauldron's set pretty high up so you can see the outer side panels without having to bend down too much (I'm guessing), but it does mean that if you're short you can't see the inside panels very well. Rosie was disappointed because she's quite keen on the artwork of the cauldron (I showed it to her as part of some homework a while ago and she drew it for her teacher) and she couldn't see her favourite panels. There's a step up so you can peer down to the panel that's in the centre at the bottom of the cauldron, which shows a female figure (described on the information panel as a "woman-warrior," I think, wielding a sword), with a large bull in the middle, but there really needs to be steps all around it so you can get a better view of everything, and so you can see the base panel from different angles.

There was a bucket with ducks on, from Hallstatt, Austria, that Tom was keen on (for no apparent reason he loves ducks more than anything else in this world): 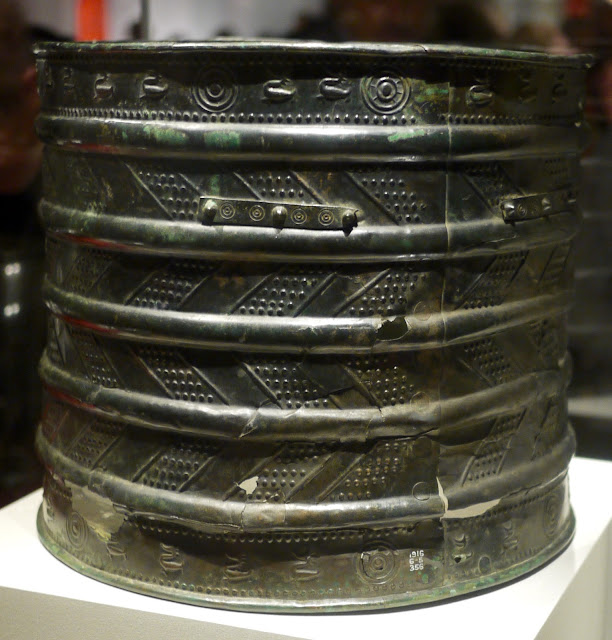 Which was situated next to the Dunaverney flesh-hook: 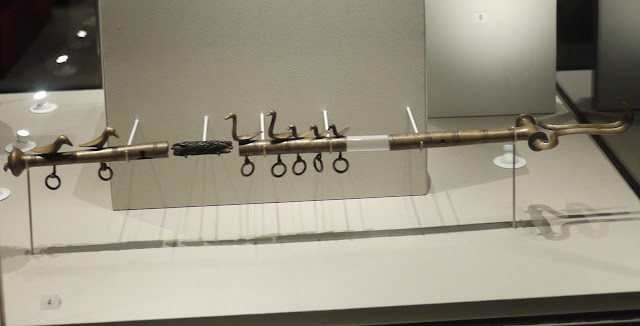 Which Tom was also keen on. Technically this flesh-hook is more likely to be Bronze Age, only very possibly very early Iron Age, and it's got nothing to do with the bucket it's sat next to, but it's a stunning piece.

An altar to Brigantia (Romano-British) is also on display, which was found at Birrens in Dumfries and Galloway. It's not known for certain if Brigantia was honoured by the Britons this far north, into what's now Scotland, or if the person who erected the altar had come from further south and happened to erect the altar as they were passing through, but the altar is impressive to see nonetheless – the sandstone it's carved from is very glittery and sparkly, which doesn't come out in photos, and the information card had some really interesting details on it. Here's the altar: 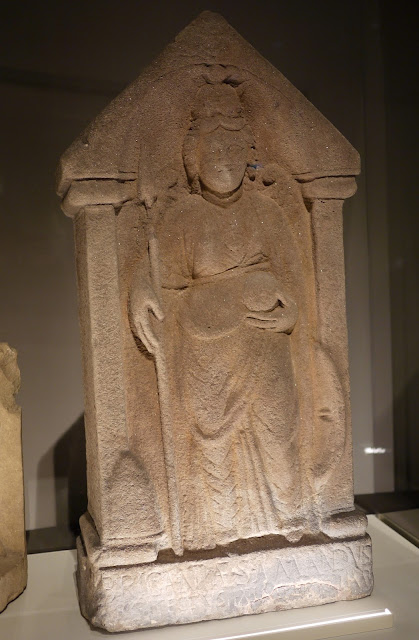 You can probably just about make out her name at the bottom there, and the inscription translates to 'Sacred to Brigantia: Amandus, the engineer, fulfilled the order by command.' The figure of Brigantia is portrayed in a very Roman style. If you look carefully you can see that she has wings folded behind her shoulders, which is supposed to be a motif linking her to the Roman goddess, Victory. She's wearing armour, which links her to Minerva (I presume the spear does as well?), and she's also wearing 'turretted headgear' marking her as a goddess of a city. The globe she's holding, along with the pointed stones at her feet, link her with Juno Caelestis, goddess of the heavens. On a different altar, from Yorkshire, she's referred to a Caelestis Brigantia (Heavenly Brigantia) so that's not a unique motif here. So it's really very complex and shows just complex she is as well; she doesn't fit neatly into one box, so the imagery and motifs draw from all kinds of goddesses, I guess. There are some more details about the statue here, including mention of a Gorgon's head on her breast and the fact that it seems to have originally shown evidence of having been gilded.

Over all I thought the information presented was sound and provided a good introduction to the subject of the Celts – and noticed a very strong emphasis on the fact that the Celts are a cultural and linguistic term, not a genetic one – but we got talking to a very nice lady from Cornwall who'd come to see the exhibition and she commented that she'd had a hard time understanding what some of the terms meant and had wanted to ask a member of staff what a "boss" is, for example (I gave a highly technical answer of "the knobbly bits on shields"), so I guess some of the information presumes a greater level of archaeological jargon than most non-archaeologists might have.

The gift shop – which you get conveniently filtered into on the way out of the exhibiton – has lots of shiny things (as well as books with glossy pictures) but much of it's as over-priced as you might expect. I treated myself to a wee Pictish boar pin to put on my coat (although the Picts were largely overlooked in the exhibition itself), along with a laser cut card of the same boar that I might frame and hang up somewhere, and a nice little "Fun with Celtic Stencils" booklet, and then we went on to look at the Greeks (for Tom) and Egyptians (for Rosie). There was plenty more Celtic stuff in the Iron Age Europe section of the museum too, so I spent a while taking photos there while the kids and my mother went on ahead (I've posted some of the pics on the GN page on Facebook already).

I'd be interested to see what the exhibition's like once they get to Edinburgh next year (though I doubt the kids would agree to a second go-round). Most of all, it would be interesting to see what the crowds are like and whether the rudeness is just down to location (London. Bleh) or maybe layout (dark and crowded).
Posted by Seren at 15:13 2 comments: