Welcoming in the autumn

Usually my festival preparations start with a good clean and tidy up so everything's in order and everything else follows from there. It's not the most glamorous thing to do (or fantsatically scintillating thing to write about) but I like to start the new season with everything as it should be – start things afresh. Inasmuch as I can and according to my abilities at the time.

This time around, though, our Lùnastal-related celebrations were a little more spread out and kind of more disordered than usual, in a way, mostly because we had a mini "staycation" in the week leading up to August 1st and it took some time to recover from Actually Doing Stuff before I was physically up to much again. Much as I would've liked to have done Ireland again this year (and so would we all), we weren't able to book anything because Mr Seren got confirmation of having some time off too late for that, and seeing as he's been working so hard lately he didn't want to have to do too much driving hither and thither, so a week of outings was a good compromise.

We did a water park, a safari park, the Sea Life Centre (otters!), the Science Centre, and, on the day before Lùnastal itself, a we went to an adventure centre where the kids braved a "sky park:" 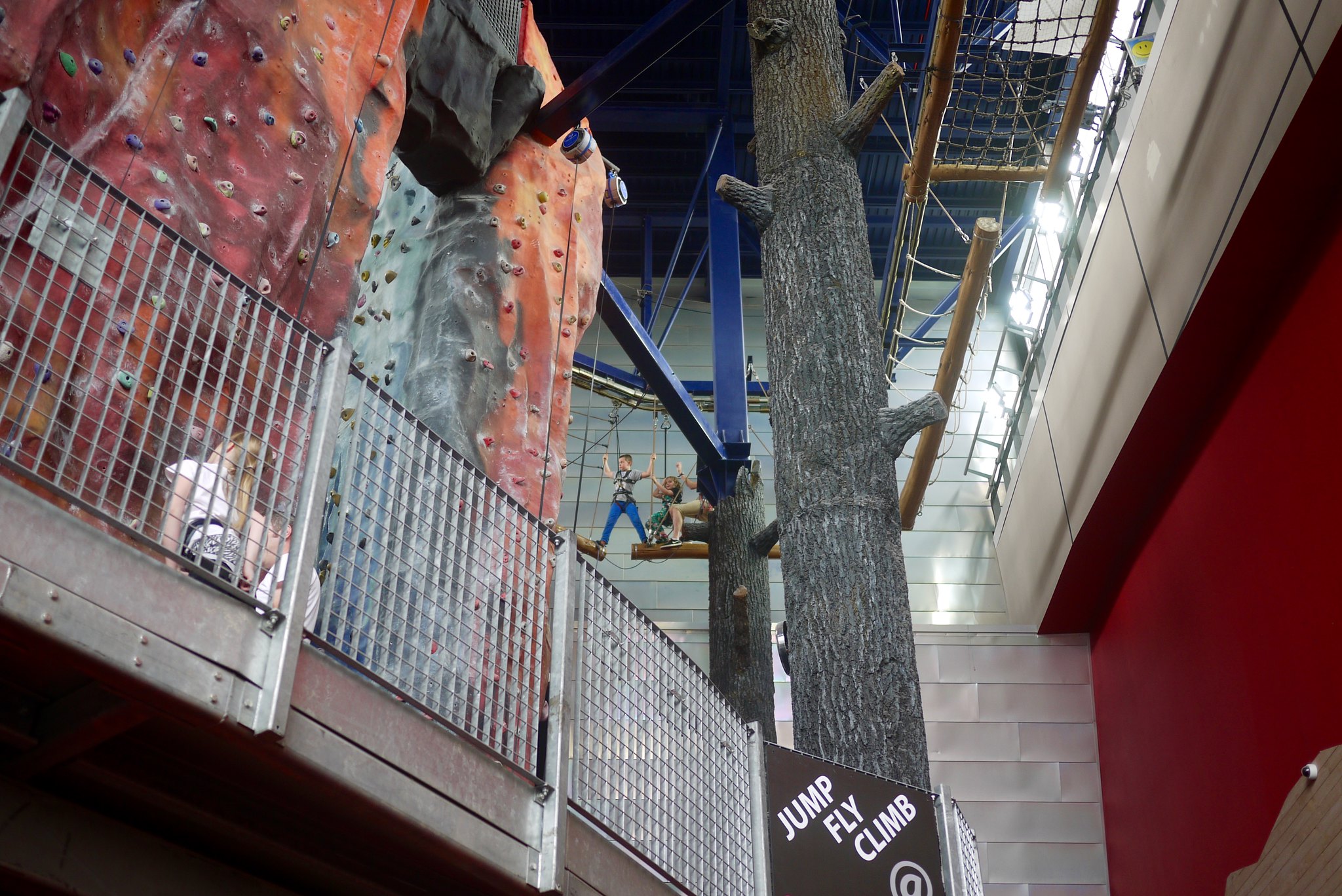 Rosie was terrified but insisted on doing it anyway, and then being attached to little more than a rope meant that she got so far and then reality sank in and she refused to move because what the hell are we doing we're going to die. The instructor stuck with her and helped her along, and then it was time for the drop: 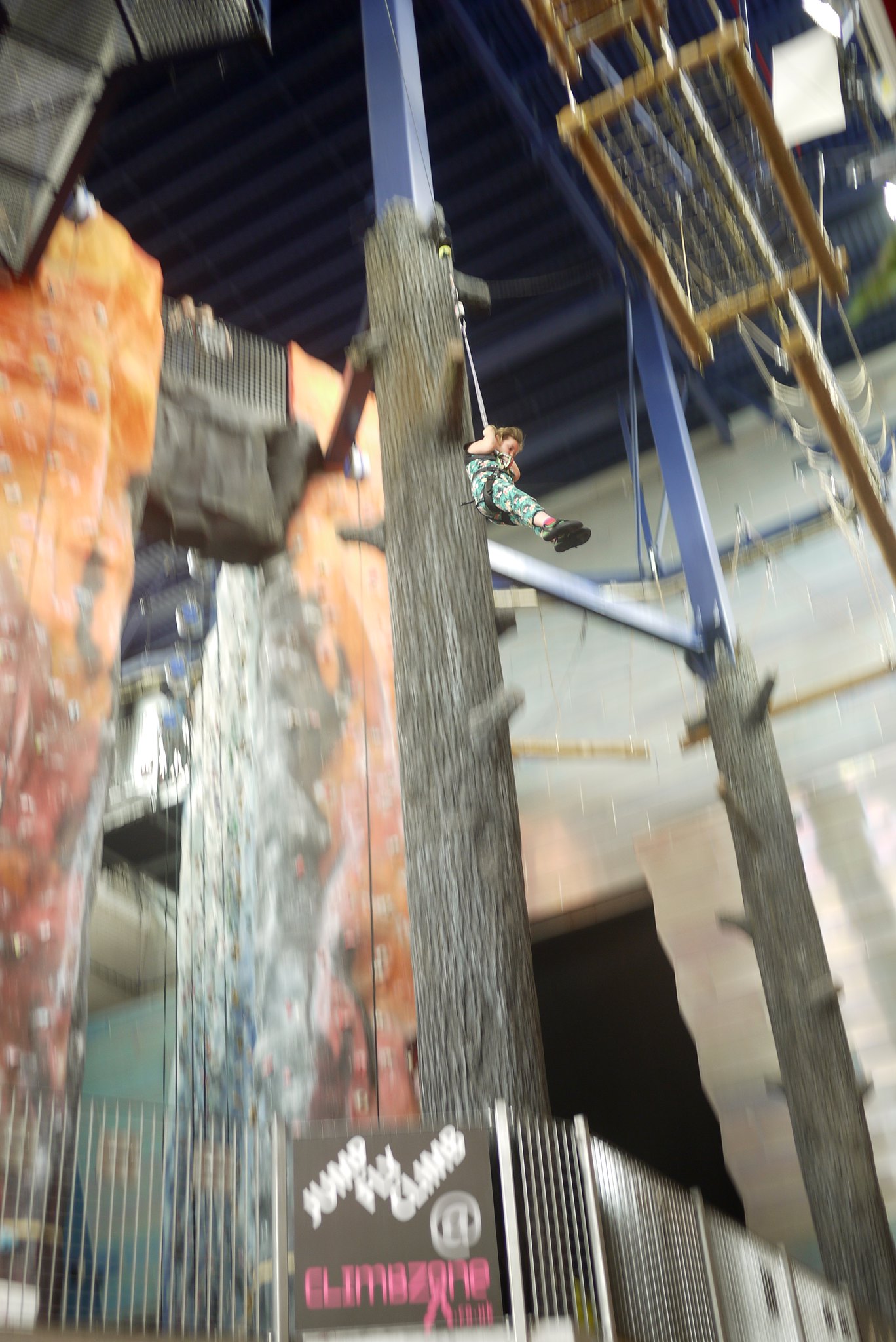 Which I'm amazed she did, really, because she could've easily walked down the stairs instead. By that point it was a matter of principle, though. Tom loved it and went back eight times until the time slot was up.

They were both very brave and I think such displays of courage were very apt for the festival occasion. The next day we all had a well-earned rest...

Eventually, though, it came time to celebrate, so the house was set in order, and the feast was prepared. I like to try something new every now and then for the festivals, even if it's just simple, so this time I decided to try making a gooseberry fool, which is gooseberries: 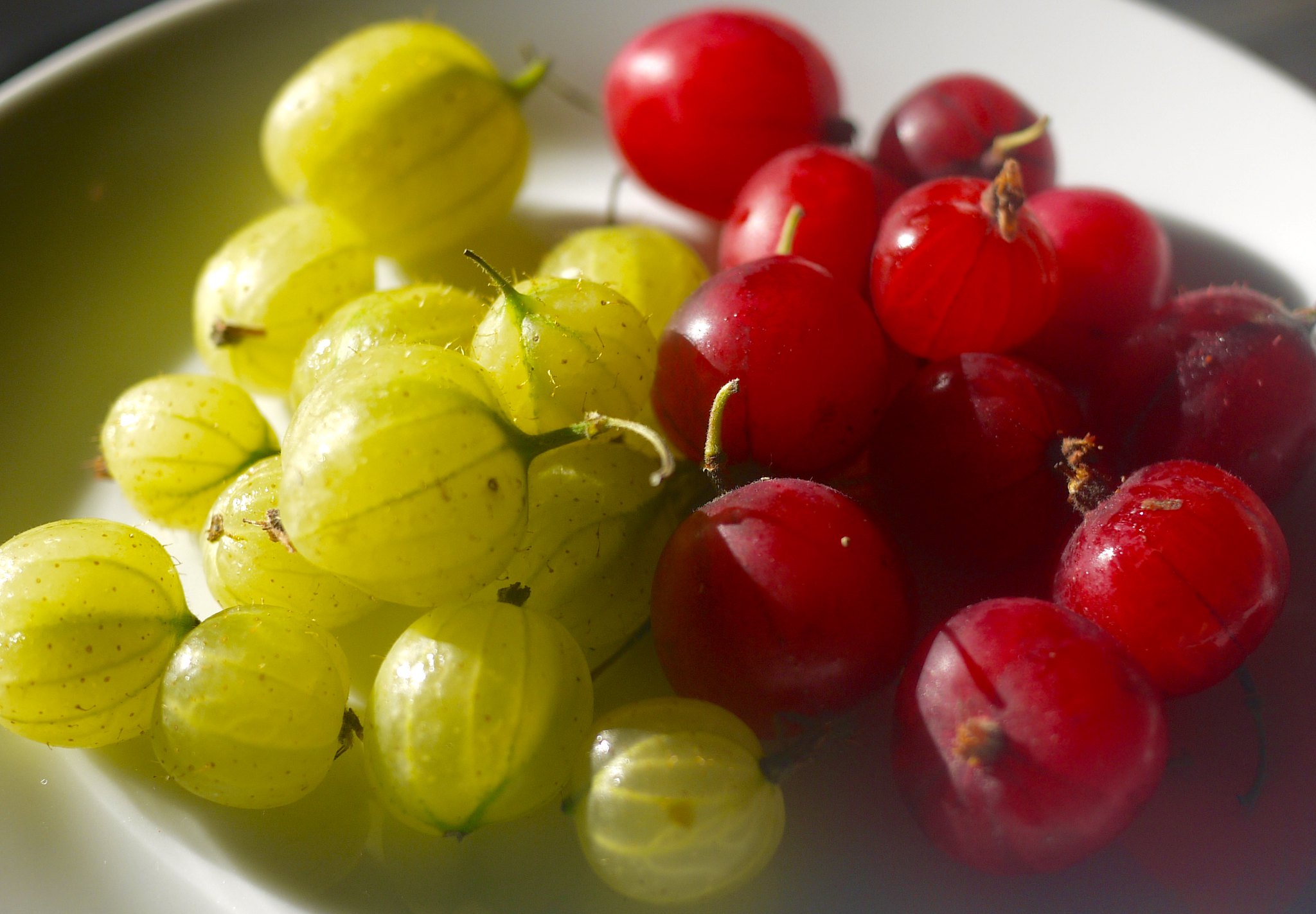 That are stewed with a little sugar to sweeten and mixed with lightly whipped cream to give a yummy dessert (fools are a type of syllabub, a ye olde dessert, and so it's related to cranachan, too). They might look like slightly hairy grapes, but don't be fooled (arf), gooseberries are extremely tart on their own. The sugar and cream helps take the edge off: 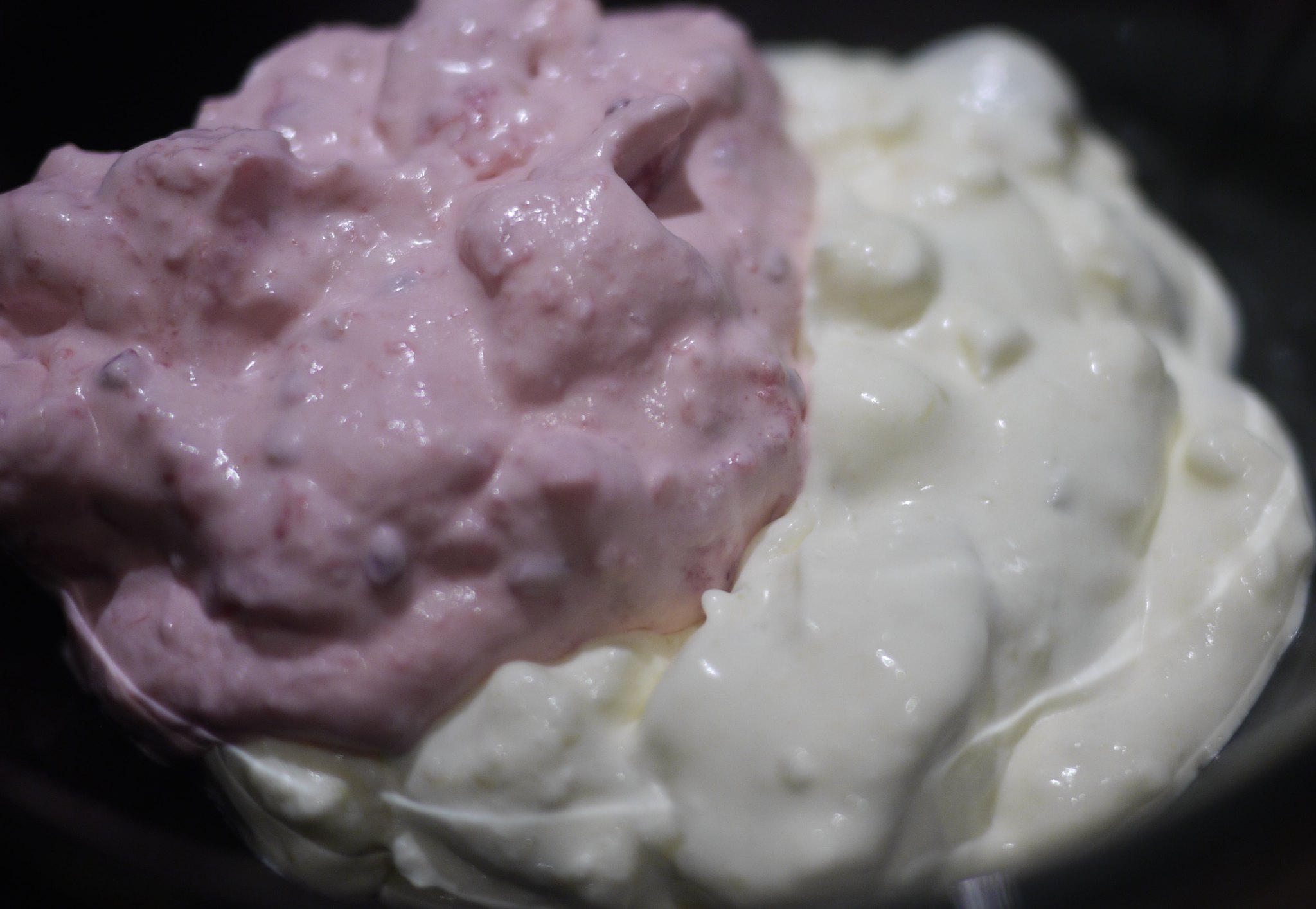 It doesn't look like much but it really does taste good (you can strain the lumps out if you like but I didn't because it's healthier, dammit).

Aside from bilberries, gooseberries are also traditional to pick for the festival, and seeing as my blueberries never ripen until September in my garden I was tempted to buy a gooseberry bush or two during the summer so I'd have something to harvest (they're supposed to be harvested wild, admittedly, but I've yet to find any gooseberries or bilberries growing wild round here). I held back this year because I want to see how all the potted stuff does before I get too ambitious (it's going OK, so far – no casualties yet), so these ones I bought from the supermarket. I ordered two punnets and got the red ones as well as the green as a surprise, so I ended up making two separate fools to see if there was much of a difference. I've never seen red gooseberries before and apparently they're sweeter, but we all agreed the green variety was much tastier.

Our feast went down very well, over all, and in the evening I sained the house, made my offerings and devotions, and all the usual. It was too cloudy to see any meteors zipping by, but I spent some time outside, just enjoying the quiet and the cool nip in the air.

The next day the kids and I took a day trip to Largs for ice cream and a trip to what the kids call "the seaside park" as an end of summer holidays treat – these ice creams are a very rare treat because they're huge and probably amount to the average weekly calorific intake... 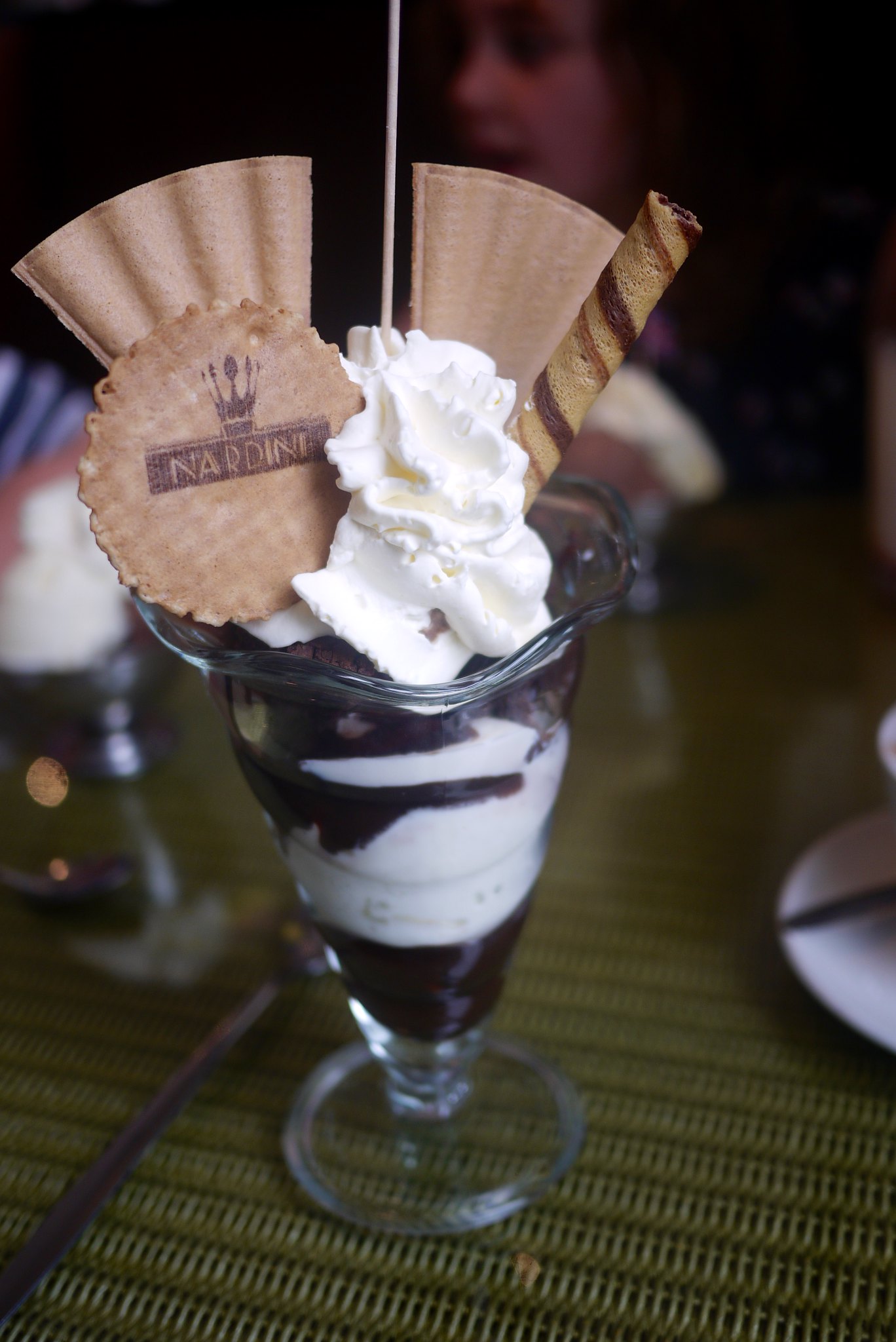 But who the hell cares? I had a hot fudge brownie sundae, and yes. I ate the whole damn lot (and felt rather sick afterwards). Tom and Rosie's sundaes came with British and German flags, respectively, for some reason, so the kids re-enacted World War I by way of flags while demolishing their sundaes. Naturally...

And then, with a bit of time to myself later on, I took the dogs for a walk up to the high point in the village I usually go to for Là Lùnastal, and made some offerings and took the time to contemplate things. Along the way I discovered some raspberries growing wild – they're usually way past their best by August, but the weather has delayed a lot of fruits – so I picked some of those to add to my offerings as well.

It was another quiet celebration for us but it was just what was needed, I think, and the gooseberry fool seemed to go down well as an offering. The kids are now obsessing about when we can go and pick the blackberries...