We're well past Là Fhèill Brìghde and Là na Caillich but neither went unnoticed for us here. Although given the weather it seems the Cailleach didn't go to her rest without a fight this year...

Since near the end of last year I've been struggling a lot more with chronic pain issues and I'm awaiting the results of another MRI to see if scar tissue from my previous surgery is the problem, or if the disc has just gone caput again (or maybe something else is up...) and will be attending a group physio session, that's intended to help me live within my limitations a little better, in the coming weeks.  All of this – and being busy with other work and some ongoing projects – means I haven't been up to much here on the blog, and celebrations have been scaled back to just about the bare bones lately. As I've written about before, when it comes to being somewhat challenged in the mobility area, it generally means that my devotions are dictated by how much I can handle at the time. I do, but I only do if I can, and as much as I can. And I'm OK with that.

So Là Fhèill Brìghde was pretty low key, although Rosie joined in with enthusiasm and gusto because this is her favourite time of year. I bought a new doll-making kit for us to make our dealbh Brìde with, and invited the kids to join in. Tom wasn't so keen – he's less interested in crafting than Rosie is – so it was just me and Rosie this year. As usual we made a few dollies and picked the one we thought worked best, and this is what we ended up with: 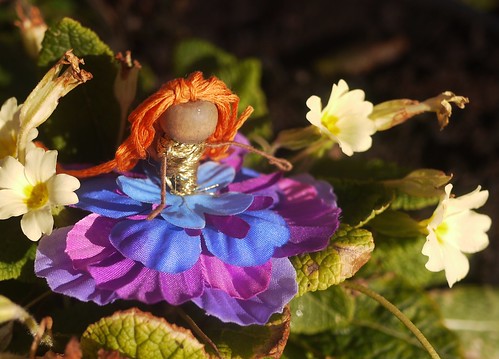 We feasted and sained, and lit some candles for Brìde to put in the window. I offered the honours to the kids, if one of them wanted to the lighting, but they both wanted to do it so we ended up deciding they should do a candle each; they lit, and I said the prayer, then went to invite Brìde in. Rosie was very excited to put our dealbh Brìde to bed, and Tom joined in by arranging a cow next to her.

Then we picked out a few pieces to put out for Brìde to bless on her nighttime rounds – this is serious business for Rosie, because she's taken the idea to heart. Ever since we left her favourite blanket out for Brìde to bless, she's insisted on having it on her bed every night so "Brìde will keep the bad dreams away." The blanket must go under the duvet so it's touching her directly; this is important. So important, in fact, that she didn't want to let go of the blanket for even one night, and even though I told her it's traditional so Brìde can bless it again. In the end we left out a different blanket instead.

The weather was pretty nasty so I put them in the shed, which I left propped open a little, so they'd stay put, but as it happened Mr Seren's plaid ended up on the opposite side of the garden by morning. It was only thanks to the fence post that it didn't get blown away entirely, and Mr Seren was pretty bemused to find his plaid flapping around. I guess it was a good job it wasn't his underwear...

A little later on in the month we went on a big long walk up to the forest I took a walk to last year at Là Fhèill Brìghde. This time I took the kids as well as the dogs and we got there right at the golden hour: 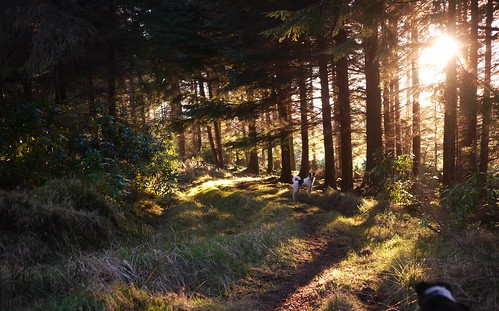 It's been a pretty mild winter but spring seems to have got off to a slow start in spite of the fact that a lot of trees started blossoming even before Hogmanay. Nature seems a little confused lately, and we didn't see many signs of spring on our walk. Plenty of mud, though: 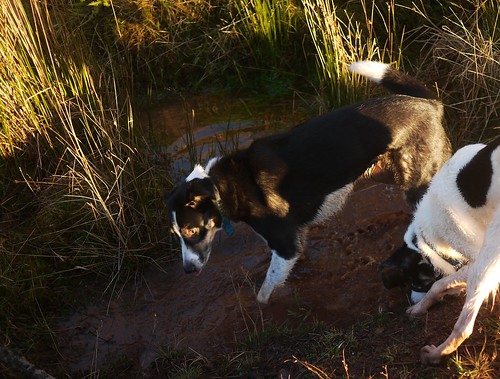 For Là na Caillich we had a pretty vicious storm so we had to hold off on our usual a visit to the beach for the few days, but we got there in the end and made our offerings to the Cailleach and the Cailleachan. Now I'm just waiting for a bit of a dry spell so I can get out in the garden and start tidying things up (though I might have to get a gardener in this year, just to keep on top of the lawn). It's been such a wet winter that the lawn is more bog than anything at the moment and it's going to need resowing in places. Some of the plants I put in around the new pond are going to have to be replaced, too, because they just weren't able to cope with all the rain – I was worried that might happen. I have a gooseberry bush to put in, though, which I'm pretty pleased about (we'll hopefully be able to pick them for Lùnastal, as is traditional, though I'm not anticipating a crop for a while yet), but so far that's it. I haven't thought about what else I'm going to put in but I'm thinking about expanding the containers – bigger ones so I can maybe put a small fruit tree in, too.

So spring is officially here and a quarter of the year is gone already. Hopefully next week I'll be going to Edinburgh to see the Celts exhibition (again).